Are there really unseen presences that guide us during our journey through life? Can they reach us from where they are? My life has been an example of definite guidance since I was a little girl of five years. The whole beginning of the quest to know the answers to these questions was the event of seeing a face at the window in my bedroom one night. As I looked into the face which was so real, more real than an ‘ordinary’ face. I cannot ever forget that face. The kind brown eyes twinkled with hope and promise and inspiration. The gentle, broad smile reassuring, but also with a sense of humor. The short sandy colored hair showed me it was a the face of a young boy. Who was it?

Where did the face come from?

Questions crowded into my five-year old mind but they went unanswered then. As I feel asleep that night, I distinctly remember feeling a presence with me, I did not see the presence but was not afraid, the presence was reassuring.

This presence has been with me always. This is my spirit guide, it was his face at the window. Many years later I found a picture of the very same face. I cannot publish his name or this picture. He is a well known person and has family members still living. I am sure they would not be so inclined to want to know their father or grandfather is alive and well and living in the spirit world and is my guide.

One Saturday afternoon I went to the public library, I was still in high school then. I stood looking at all the bookshelves. I had to know; what was the face at the window, and why did I see it? I knew the Dewey Decimal classification of subjects but had no idea what subject the face would be in, so I started at the most logical place, the number one, 100. This was the first bookcase in the library. At that time I did not connect the face with philosophy or religion.

As I walked along the shelf, I felt the unseen presence, that same presence that has always been with me. One book seemed to ‘jump’ out at me and I looked at its title; it read This is spiritualism. Without hesitating I took the book off the shelf and opened it. The book had black and white photographs of faces of spirits seen and captured in photograph by other people. You could not see the rest of the person, just the face. I remember staring at the pictures incredulously, and putting it together; the face I had seen was the face of a spirit from the spirit world. This still did not answer whose face, but the book answered many other questions.

The book, This Is Spiritualism, was written by the late Maurice Barbanell, one of the founding editors of Psychic News, a weekly newspaper published in London, England from 1932 to 2010. The Psychic News educates people about the truth of spirit return from the afterlife. 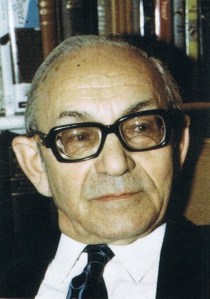 As I read Barbanell’s book I received an excellent education. He too was skeptical about spirit contact, how it operated, and why it happened. The movement of Spiritualism organized into the National Spiritualist Union began in 1848 and is still active today. There are so many encounters with spirit that have been documented and scientifically examined the information will take a while to research. Nevertheless, the information exists and proves the existence of the human personality continuing on after the death experience. The subject of spirit contact is nothing new.

Maurice Barbanell is now in the spirit world. I am sure he is aware of the service his book did for me, and many others who benefited from his tireless work to educate people about the afterlife.

So who is it that guides you? I have come to know my spirit guides and my life has taken on a different meaning since I found out about the existence of a spirit world and the intelligence operating from this world.