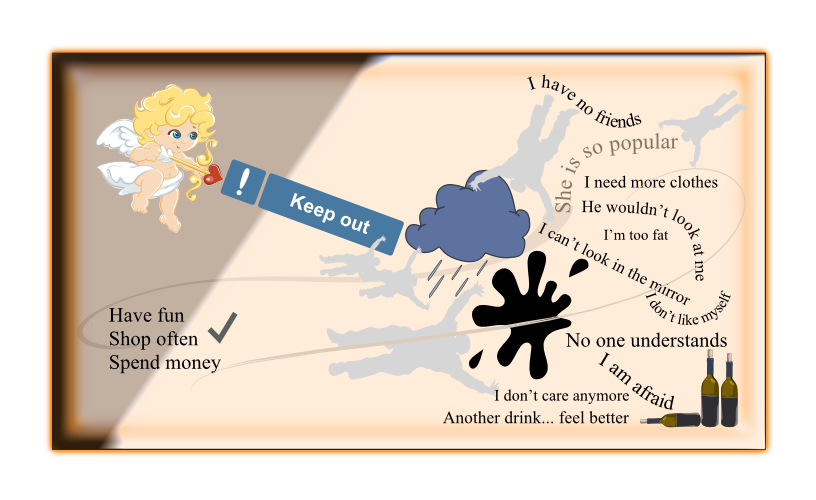 Is it true the negative spirit can come and pretend it is an angel of light? Yes, it can. So how do you know the good from the bad? This is a moral question we have to ask ourselves if we want to understand what is a negative influence. The interaction between the positive and the negative side of our nature is a constant reconciliation. This is part of the direction towards the growth of the spiritual.

If you cannot tell the difference between positive and negative you are headed in the wrong direction.

The abstract subjects: love and hate, fear and courage, envy and acceptance, fall into the mores of character we learn about and experience. The storm of life rages on for all of us. At times we feel angry, at other times love. These abstracts are connected with our emotions. It’s easy to think about these abstracts but a more accurate picture is; we are drowning in the sea of our emotions all the time, until we learn to swim.

When you are fed up, angry, because lets get real, life is just not perfect and happy all the time. And these hurt feelings are inside of you, and you may not be able to talk about them because no one really cares. This mindset builds a framework of negative energy that exists inside of you and will eventually attract other people who feel the same way, or it will isolate you to go off on your own. This is where the intelligent evil can begin to influence you, but this is not seen by you.

The spirit is not visible all the time, if it was this would be easy to figure out. You would identify the spirit as being bad right away, but it’s not. The evil intelligence is a negative spirit that isn’t visible, but it exists, and feeds off the negative energy you are emanating. We are magnets and we attract our experiences to us.

The most vulnerable to the negative influence are children and teenagers.Young people in particular are caught up in the pain and agony over their life experience and are not equipped to understand their vulnerability. Technology has changed everyone’s life we are only just beginning to feel it’s effects.

It’s not just children and teenagers, it’s all of us that are affected and subject to the influence. No one really catches up with technology, it moves too quickly for the human spirit to absorb. Artificial intelligence does not have emotions even though you can have a conversation with a built in responsive personality in your smart phone.

One of the most abhorrent traits developing in our wonderful worldwide web activity is the constant destructive stream of criticism and gossip. Anything goes, and everyone feeds off the gossip, sometimes called news.

Gossip develops an attitude, your attitude about people in general, how you view them and yourself. It is this negative attitude that prompts an openness to the negative influence, and actually draws the negative element towards you and attracts a negative spirit.

Eventually the influence can be so strong, you may hear a voice telling you what to do. I believe people are so uneducated about the existence of intelligent evil that it is no wonder there is a glorification of the bad, and the good is boring.

The Spirit Guide from a higher intelligence level will not ever tell you what to do, nor will it feed on your negative attitude.

Within us is either the greatest good or the greatest evil; it is really that simple. We don’t like to think about this but we are vulnerable to the potential evil within us, and this is when it becomes influenced by an intelligent evil outside of us.

For example, if someone  is driven by revenge or hatred they can be further influenced by intelligent evil to actually carry out their hatred in a harmful way to themselves or someone else.

Intelligent evil implies there is an intelligence behind the evil. There are negative spirits as well as positive spirits much like negative people and positive people. We carry our experience of this life into the afterlife.

We should be able to tell the difference between a good spirit and a bad one but our sense perception of the spirit is dull. It would of course be easier if we were able to see the spirit. The subtlety of the negative is not as obvious as we would like it to be.

What influences you not to do the very thing that will help you?

We see happiness and love and truth and good things in life, but if someone’s whole focus is on the negative, this has a direct effect and you begin to feed into the negative side of your nature.  Have you noticed how someone goes from bad to worse, then you hear about the crime they committed, or they end up committing suicide.This is the negative influence, and in some cases, is a negative spirit communicating through your own negative interior.

The most vulnerable are children and teenagers. They are defenseless against intelligent evil, and parents are equally vulnerable, unless we take a clearer look at just exactly what does influence us in life and we come to a point of realistic education about the subject of the negative spirit and how it operates.

The influence of intelligent evil

Here are some examples of how I see intelligent evil in operation:

The current fashion for teenage girls and women is an emphasis on the exaggerated sexuality of the female, not the male. The average rap performer looks like a pimp with his prostitutes and some rap lyrics are downright negative. Artistic creation is what it is, but the overriding influence is negative. Why are so many young people hooked on drugs and alcohol and commit suicide when they are involved in this industry?

No one wants to acknowledge the power of intelligent evil. It is not only the music industry that is affected, there is the ‘perfectly good child,’ who goes to an elementary school and kills children then themselves. Another model student goes to a movie theater and kills other people then themselves!

The entertainment industry produces violent movies that thrive on angry images, supremacy, sexual exploitation of women, male dominance all the elements of what destroys the individual. We are programming future generations to be warriors without intelligence. Its okay to fight and destroy as much as you can. Just act out the life of the hero as he guns down anyone in his or her way.

Surely this should grab our attention. It describes a predominantly active intelligent evil influence and because we cannot actually see the negative spirit we think no such thing exists. In addition, we are also in denial about how violent entertainment and horror movies affect the psyche. We do not understand how evil operates and refuse to recognize we can actually do something to change this picture.

In my experience I have encountered intelligent evil, and I can tell you, it’s insidious as well as subtle, and not easy to determine at first. My whole thrust in life is towards the higher aspirations, but I am also very aware of the opposing elements within my nature. With my knowledge and understanding I can override the negative, providing I am not anxious, fearful, or negating who I am in favor of trying to be like someone else.

The solution to the negative

The opposite of negative is positive if we begin by stating the obvious then we can build a stronger framework of teaching ourselves, and future generations, to educate the heart through the mind and learn to focus on the positive and correct negative behavior. When we are positive role models, especially if you have children, this sets into motion an entirely different energy than when we are negative. First, you deal with yourself, your interior; are you positive or negative about yourself as a person?

It is time to teach the children and teenagers about this subject as they are the most vulnerable.

Life circumstances are not always that simple, but we must start somewhere if you identify what is positive then you can identify the negative. When you cannot tell the difference between the two, you are in trouble, your negative emotions have control over you, and you are going to be influenced by intelligent evil.

If you are ready to know about intelligent evil, and how it operates, I would recommend  reading Hostage to the Devil, by Malachi Martin.