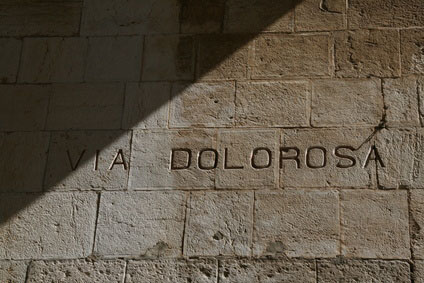 The Via Dolorosa, as it is called, is the route believed to have been taken by Jesus through Jerusalem to Calvary on the day of the crucifixion. As I looked down the narrow road there was a crowd of people approaching. In the Old City for the past 1000 years Christian pilgrims walk the route reenacting the day of the crucifixion of Jesus. As the procession passed I had to flatten myself against the wall, and something inside of me fell apart. I was watching a reenactment of an event, but was this what actually happened, or is it what we are told happened.

Every year I hear the story of the birth of Jesus and other stories of yearly festivities and remembrances of tradition. Many times I listened to academic orthodoxy; this is the way it is, and has been so for thousands of years and it is written as such.

I am not the only person who has asked these questions and nor do I have anything unique to contribute except to tell of my personal experience. I believe this is what we eventually come to, a point of needing to understand and clarify our experiences to ourselves. Everyone at some time or other wonders about the origin of the nature of religion, its existence, and how it relates to us as an individual, since we have a soul.

On a humorous note, as one who flips between time zones, I can tell you, there is no access to information as we have today, I prefer the present obviously and would not want the past to return. I just keep having the experience to compare the issues that relate to me in this lifetime, from the past.

Twenty-first century science and archaeology have exposed glaring errors of history with multiple revisions and newer discoveries. Moreover, there was deliberate destruction of documents by various megalomaniacs, and therefore there is no proof. I do not propose Jesus did not exist, I say we have a distorted view of the events of his life and time.

Connecting the deeds of the past

What is the purpose of re-enacting the past? To bring the events again to our attention. Is there not some other significance to the past other than just remembering it? What impact does this have today? Are we not still arguing about the events of the past where Jesus is concerned? The divisiveness of our behavior towards one another shows we do not even remember the principles taught by him and other wise sages.

These principles don’t change, why then should we reenact the past events if we do nothing to change anything in the present?

What indeed have we learned from the life of Jesus that is not an indoctrinated idea placed before us by orthodox authority? If you read the books about the life and time of Jesus by  noteworthy Historians of our time you will become acquainted with an entirely different man, from that which you read of in the Bible.

The book James the Brother of Jesus by Michael Eisenman is a detailed thought provoking analysis based on the Holy Bible, Josephus, Eusebius and other first century controlling documents and includes The Dead Sea Scrolls, as is James Tabor’s The Jesus Dynasty. These books introduce what we know but show the rearrangement of content about the life of Jesus. Religious history is full of contradiction and the case for religion is left hanging on the edge of a cliff.

I say a prayer of thanks to receive the benefit from their work. Remember, not so long ago you could lose your life because you could read, and books were burned recently in World War II (1940’s, only seventy years ago).  Never take for granted the ability to find the information for yourself.

The truth of the events of history was changed to suit the political time and structure of the whims of the current ruling despot. In the name of a Deity or a King it is easy to assume the power of superiority and become the authority. This is the game men have played in sheer ignorance of its consequences. I use the word men as women were written out of history in this territory. Today, women are allowed, by sheer necessity since technology, in some areas, has leveled the gender gap.

What then is the solution to the less than clear historical past? I found answers through studying the Eastern Hindu and Buddhist tradition of karma and reincarnation. Karma is accumulated actions in previous states of existence as being responsible for the state of the present existence. We have not only lived once but many times before this time and we incarnate into a lifetime with a carefully thought out plan before we incarnate.

This implies that we existed before this incarnation and agreed to incarnate again because of the necessity to resolve the karma from our other previous lives. In other words I realized in the Old City of Jerusalem, I was standing on the ground where I had been before in other lifetimes.

What was done in the past should not be repeated again

It does no good to avenge past generations even though the pain of that past is the avenge carried forward. Everything from our past is carried forward within us. I do not know why it is so prominent with me, but it is. I have tried to ignore this aspect without success many times. The same desire to know of the past inspires the Historian, the Scientist, the Archaeologist, and anyone with an interest in finding the answers to their own origin.

When James Tabor (author of The Jesus Dynasty) stood in the garden of Gethsemane as a teenager, he felt an urgency within him to find the truth of where Jesus walked. I found other books whose authors have a similar quest to mine; Michael Baigent, Elaine Pagels, Bart Ehrman, Eknath Easwaran, Gershom Scholem, Moshe Idel, Ravi Batra, M.K. Gandhi, Merlin Stone, Michael Cremo, … I have a long list…

We are searching for the meaning and origin of existence

The subject of past incarnations is intangible and will cause a great deal of doubt, until you have that far reaching and intense experience with a certainty that you feel and know. As I pursued my past incarnations and broadened my knowledge through reading about the time period, the picture of my current life became sharply clarified.

Of course history is the record of events, and the origin of the past in history leads to the biggest subject of all, religion. Since I can only relate to the world through my own soul and experience life is religion as far as I am concerned. But this is not based in a particular belief system and therefore I am religious because I practice religion within the belief system. I find the universality of the truth within religion more comfortable and would like to see harmony and tolerance rather than avenging rage.

The consequence of what we do

There are consequences for the deeds we do while we are living in this life experience. We cannot defer this responsibility to a Deity. Threats of dire consequences of judgment, hell, paradise, are all man-made theories. A made up fantasy is just that, something someone made up to coerce you into believing through fear. If you do not believe and obey implicitly, you can be killed or removed. In my mind this is a departure from an understanding of religion which goes beyond man-made belief systems or the identity of any nation.

We are all the human race not the divisions of Christians, Jews, Muslims, Catholics or Buddhists. That which is God cannot be described in such definitive personal terms as someone demanding absolute obedience to Him and killing in His name.

Divine authority (if it is divine) would not be invested in divisive belief systems, the divine nature within us is beyond the differences of religious labels. How can we decide what happens to your spirit after this lifetime when we cannot even agree on the subject of the afterlife and the continued existence of the spirit after the transition called death.

Every culture in the world believes in ‘the dead’ and has their customs and rituals concerning the journey after your spirit (or soul) leaves its body.

Historians agree the Gospels written in the New Testament depicting the life of the events of the crucifixion and when it occurred contradict each other. As I searched further, Academic Orthodoxy enters the picture, and Philosophers politely side step the label of religion and write of their personal experiences and learning from other schools of thought. I have found the struggle with religion around the time of Jesus most difficult to understand. My experiences in Jerusalem threw me into past time zones before and after the first century.

I found I could not get to the truth of things because of the overpowering indoctrination of various beliefs through the centuries prevents me. There is within me a restlessness and deep sorrow that is only released by refreshing wisdom that bounces off the pages of the many books I read. But this is book knowledge. What of the experiences I read about?